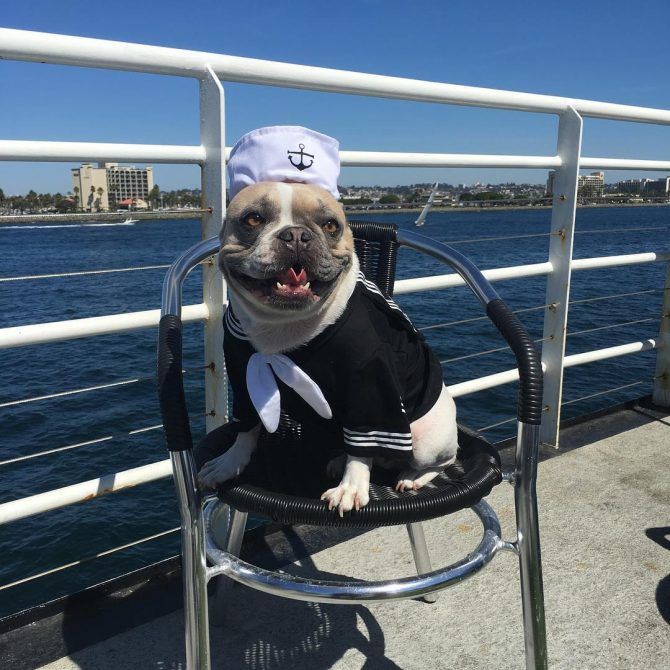 All Paws On Deck

Dog-friendly dining options made sure the guests of honor were well fed, while their human companions enjoyed their own gourmet brunch buffet and free-flowing champagne and mimosas. Pups and their companions boarded the Adventure Hornblower for a two hour cruise around the San Diego Bay.

Hornblower partnered with animal trainer and host Darris Cooper of The Pawsitive Network to benefit the Helen Woodward Animal Center, with a portion of the proceeds going to help the non-profit offer humane care, adoption for orphaned animals, and animal-related education programs.

Celebrity guest Chopper the Biker Dog was on hand to greet his four-legged friends and fans, like Dominic the Pit:

The highlight of the afternoon was obviously the costume contest, with participants of both the two- and four-legged variety sporting their best Halloween outfits. The number of fun and creative costumes was so great that the planned three prizes turned into seven.

The top three winners received gift baskets that included food, treats and toys from Petco and the Helen Woodward Animal Center, and winners four through seven received tickets for a Hornblower harbor cruise.

First prize went to the one and only Flintstones dog, dressed as Pebbles and pulling a small cart holding a stuffed Dino the dinosaur. He was accompanied by his owner, who dressed as Wilma.

Congratulations to all our winners:

Barney the Recycle Dog was the winner of the Dog Tricks contest. Barney picks up trash and throws it away at home, and on board he recycled paper!

Want to be on board for next year’s Bow Wow Brunch Cruise? Subscribe to our email offers and always be in the know!