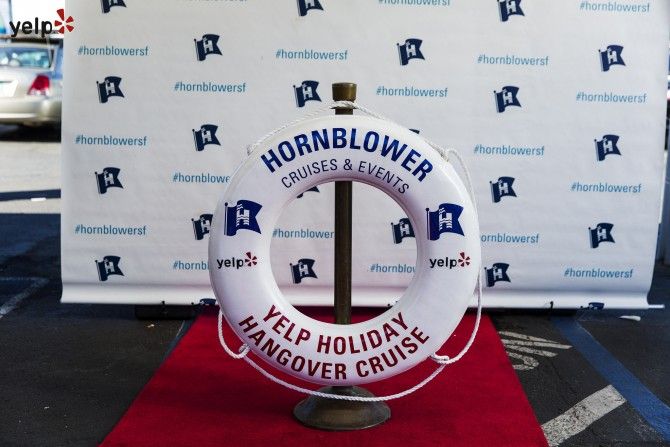 Hornblower Cruises & Events and Yelp teamed up to take this year’s Yelp Holiday Hangover event to a whole new level…three levels in fact, aboard the California Hornblower in San Francisco and the Hornblower Infinity in New York City. For the first time ever, Yelp partnered with Hornblower to host their annual events simultaneously on both the East and West Coasts.

On Sunday, January 25th Hornblower Cruises & Events partnered with Yelp for a coast-to-coast event at Pier 3 in San Francisco and Pier 40 in New York City. It was an unforgettable Holiday Hangover extravaganza with gorgeous views, tasty snacks, thirst quenching refreshments and unbelievable onboard entertainment.

In San Francisco, Hornblower welcomed Yelpers with a red carpet experience as they struck a pose with friends before boarding the 750-person California Hornblower.

Event goers were greeted by Hornblower and Yelp staff, along with 40 refreshment, food and entertainment vendors. All were eager for a good time on the San Francisco Bay.

On-board, there were so many refreshment vendors to choose from with Naked Juice fruity smoothies, Inspiration Vineyard serving fine wines and the refreshing JJoia All Natural Soda, to name a few.

On the second deck, there was a lot to munch, including savory bites courtesy of Ruby Red Kitchen, Roline’s unique homemade Filipino dishes and Flan Flan Ta-Ta caramelized custard delights.

The Grilled Cheez Guy was feeling popular with Yelpers lining up for the vendor’s tasty, cheesy sandwiches freshly prepared on-board. As one San Francisco Yelper put it, the grilled cheese was “Deliciously naughty and so worth the 15-20 minute wait.” (Mariko M.)

Even our Hornblower staff was sure to share some good eats of our own with burger sliders, smoked salmon lettuce cups, pastries and specialty cookies.

To top it off, there was more to love on the third deck with Fort Point serving up smooth beer, freshly prepared right here in San Francisco. The beer paired well with Peter’s Kettle Corn, which was sure to provide Yelpers’ taste buds with a roller coaster of flavors, including: the Matcha Green Tea Chocolate Drizzle, Salted Caramel and the Oakland Mix, featuring spicy chipotle and cheddar cheese seasonings.