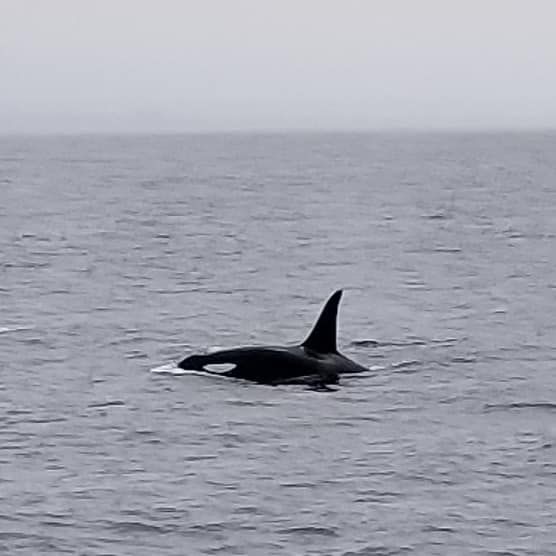 Orca alert! Last Saturday, our Captain, Whalers(naturalists) from the San Diego Natural History Museum, and on board guests were thrilled to spot three Killer Whales (orcas) off the San Diego coast during our Whale & Dolphin Watching Cruise. Orcas are rarely seen off of Southern California. This is the first time we’ve seen killer whales since January of 2017. The trio of whales included two adult females and an adult male with his characteristic, tall, dorsal fin. While there are several ecotypes (forms) of killer whales, these three whales are believed to be the Eastern Tropical Pacific (ETP) ecotype, that is usually found in warmer tropical and subtropical waters. The whales were spotted near a herd of Common Dolphins, which are one type of prey for these whales who also are know to feed on large fishes and even baleen whales. This group of whales was first seen earlier in the week off the coast of Oceanside, then Orange County. We last spotted the killer whales heading north again, and hopefully, will be able to see them again when they head back south. Learn more about killer whales and other dolphins here. (Photo by SDNAT Whaler Judy Peacock.)