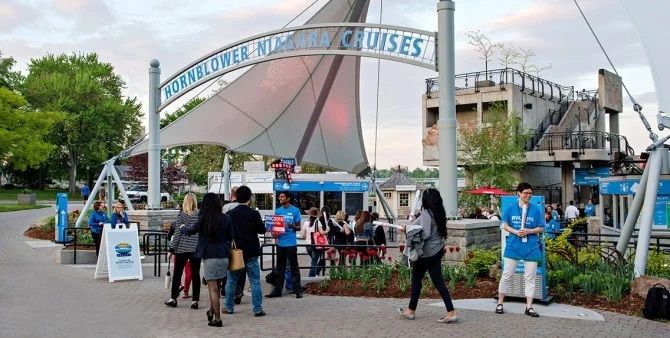 This is the first year in it’s 39th year history that the premier Canadian travel trade annual conference, Rendez-vous Canada (RVC), has come to Niagara Falls.

Over the course of four days, the event attracted 1,600 delegates from 31 countries, representing major tourism operators, international buyers and destination marketing organizations. In addition to educational platforms that feature the many Canadian destinations and attractions, the most intriguing aspect of this year’s program was to add actual rate negotiations at the conference so that Canadian travel partners have an opportunity to generate tourism dollars.

The group’s first stop was an opening reception on May 26 in Niagara Falls with Hornblower Niagara Cruises. Crafted to show off Canada’s many cultural assets, the evening was a celebration of music, dancing, socializing and embibing at the Hornblower Landing where the illuminated Falls set the stage. The customized menu featured gourmet artisan pizzas, local award-winning Niagara wines, Canadian-inspired culinary desserts and Niagara’s favorite Icewine marshmallows roasted over an open bonfire (see recipe below).

Rendez-vous Canada is led by the Tourism Industry Association of Canada and the Canadian Tourism Commiss.

For more photos of the event, be sure to visit our RVC 2015 at Hornblower Niagara Cruises gallery!

Place icewine in a small saucepan over medium heat and simmer until reduced to 4 tablespoons, watching closely at the end to prevent scorching; cool.

Pour the 1/2 cup of cold water into the bowl of a stand mixer fitted with a whisk attachment. Sprinkle the gelatin over the water and let it stand for 10 minutes.

Meanwhile, mix the sugar, corn syrup, remaining water, and the icewine syrup. Bring to a boil and cook until the sugar reaches soft-ball stage (240º F).

Turn on the stand mixer to a low setting. Slowly pour in the hot sugar mixture, allowing the sugar to run down the side of the bowl. Add the salt and turn up the mixer to the highest speed. Beat for 12 to 15 minutes, until the mixture is fluffy and soft. It should hold soft peaks. Add the vanilla and beat for a minute longer.

Pour the mixture into a 9 x 9-inch cake pan that has been greased with oil. Using slightly wet hands, flatten out the marshmallow. Allow to set for at least 2 hours in a cool dry area. (Do not place in the refrigerator.) Once the marshmallow is firm, remove from the pan. Cut into even squares with a lightly oiled knife and toss each square in icing sugar to coat. Enjoy!