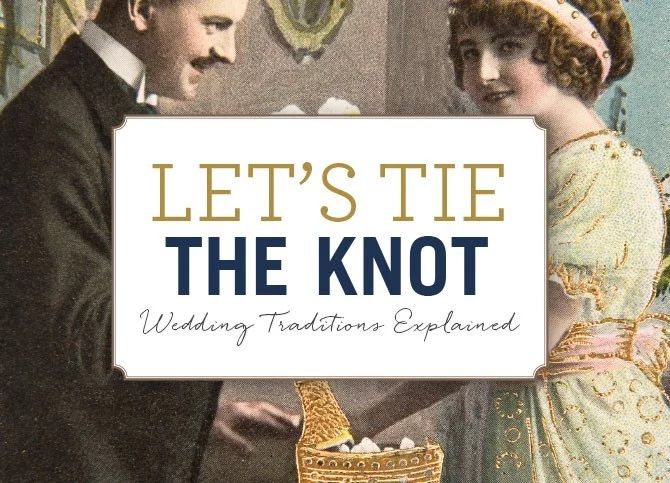 There are many traditions and customs when it comes to getting married. Here, we touch on only a few of the most common.

Tie the Knot
The whole “tie the knot” idiom came from a Renaissance era ceremony called “handfasting.” Before Hogwarts, Britainers made a marriage contract by having the bride and groom join their hands together to create an infinity symbol. However, this wasn’t supposed to mark their life forever. The couple was expected to live together for a year and a day (or 13 moon cycles in jolly Old England speak) to see if they wanted to get married for a lifetime. How’s that for going on a test run?

The White Wedding Dress
Early Christians wore blue wedding gowns to represent purity and not because they wanted to commemorate their favorite Lady Gaga costume. The custom of wearing white didn’t start until the Victorian era. Queen Victoria kicked off the tradition by wearing white to her own wedding. Queen fans like Grace Kelly picked up the trend and now it’s a staple in our culture.

Honeymoons
Samuel Johnson, not the guy who makes the beer – that guy’s last name is Adams, first warned people of the fleeting tenderness that plagued newlyweds by penning articles about hony mone. Hony first became associated with marriage by being the name of a type of mead (aka. alcohol) that a couple drank during the first month of marriage in the 5th century. Sounds like a long Vegas trip. Obviously, couples did not heed his bad mead and continued with the honeymoon tradition. During the early 19th century, couples traveled in a bridal tour to visit relatives who couldn’t make the wedding. Long road trip after a stressful wedding anyone? Modern honeymoons became widespread beginning in the 1870’s, as one of the first instances of mass tourism. Typically honeymoons would start on the wedding night, with the couple leaving midway through the reception to catch a late train or ship. However, in the 21st century, many couples will not leave until 1–3 days after the ceremony and reception in order to enjoy the party to its fullest and have a relaxing night afterwards to recover, before undertaking a long journey. In Jewish traditions, honeymoons are often put off seven days to allow for the seven nights of feasting if the visits to friends and family can’t be incorporated into the trip.

The Wedding Veil
There are many wedding veil origin stories. Some historians speculate that the tradition was introduced in ancient Rome to protect the bride from jealous evil spirits. In medieval times, this tradition was possibly started to protect the bride from “the evil eye,” because the veil is a symbol of purity, chastity and modesty. Other historians believe the bridal veil originated as part of the arranged marriage tradition: men bargained with an eligible young lady’s father for her hand in marriage. After the ceremony, the veil was lifted to reveal the bride’s features. Perhaps, this was a way to keep a groom from backing out of the deal if he didn’t like what he saw. Although women were required to wear veils in many churches during the 19th century, the wedding veil comeback also coincided with society’s emphasis on women being modest and well-behaved.

The Vows
During the Roman Empire, the lower classes had ‘free’ marriages where the bride and groom would agree that they were wed by mutual consent. Wealthy Romans would publicly declare their union by signing documents detailing property rights. The oldest traditional wedding vows can be traced to medieval churches where couples would go beyond pinky swearing and promise out loud that they would always “love, cherish and obey.” Now, it’s common for people to customize traditional vows or write their own. You never know what the future might hold.

Wedding Rings
The wedding ring has always been a sign of love, but it used to also represent “earnest money.” After the couple would exchange rings, the groom would hand over some gold and silver coins to the bride (not a bad tradition for the bride). The double ring ceremony was a recent invention by the American jewelry industry. This practice was encouraged in the late 19th century and now makes up at least 80 percent of the ceremonies today.